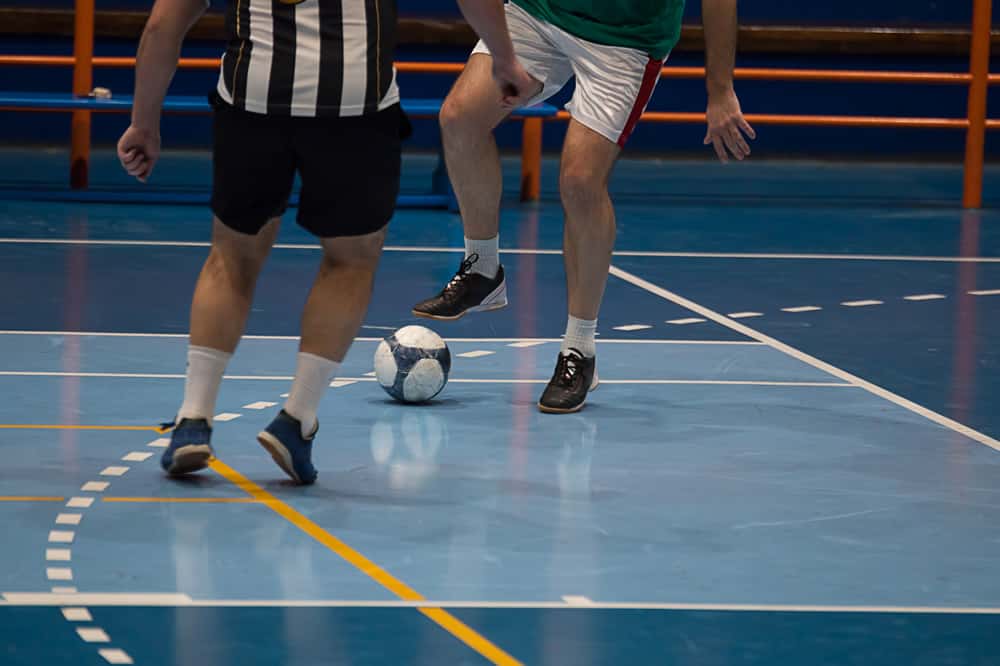 The sport of futsal is similar to soccer in appearance, but it differs substantially in many other ways. Futsal and soccer have many differences, but the ball is one of the most apparent differences. Here we are going to take a look at the differences between the two.

The basics of futsal

The name ‘futsal’ is derived both from Spanish and Portuguese origins. The Spanish phrase Futbol de Salón, or football salon, or, more practically, indoor football, both translate into English as football. It has been generally accepted since 1985 that this form of soccer is simply called futsal.

Futsal matches are usually played on a hard floor court indoors. A futsal court has the following dimensions. It has a minimum length of 25 meters and a maximum length of 42 meters. Minimum width of 16 meters (52 feet) is required, and a maximum of 25 meters (82 feet) is allowed. The number of players is another significant difference from a classic soccer pitch. Unlike a typical soccer team, each team has only five players. The only similarity is that one player must be a goalkeeper.

The timing of the two sports is also very different. During a futsal stoppage, the clock is stopped until the play is resumed. The players will have no incentive to waste time or run down the clock if their team is winning.

Every half of a futsal match lasts for 30 minutes. Every 15 minutes, there is an interval. Another difference in time is that each team is granted a one-minute timeout in each half.

Futsal balls are smaller than soccer balls. Here are the specifications for size four balls (Futsal balls). They measure between 62 and 64 centimeters (24 to 25 inches) in circumference.

Also, both soccer and futsal have different outcomes when their balls hit the ground. Soccer balls bounce when kicked. Because of this fact, control and touching the ball with the chest or head of a player are essential elements of the game of soccer.

Due to the high focus on speed and control in futsal, a futsal ball does not bounce as much. Due to this, the outer material on a futsal ball is more rigid than on a soccer ball.

What is the purpose of a bigger soccer ball?

Having a large ball in soccer is advantageous, especially for the goalkeeper. Soccer fields and nets are extensive. When the ball is large enough, the goalkeeper will have better opportunities to catch it well or block it from entering the large net.

Goalkeepers can handle fast incoming balls much better when handling a large ball. Regular soccer balls are generally larger than other soccer variants, like futsal, for this reason, and others.

Since futsal goal size is relatively small, a large ball isn’t really needed as goalkeepers can manage even a small ball.

A futsal ball is made not to bounce as much as a soccer ball. The bounciness of the ball is affected by several factors, including the ball’s inside materials and the air pressure.

Futsal balls generally contain foam, cotton, or other materials that reduce their bounce and make them softer. Futsal balls bounce less than soccer balls. Therefore, the ball is more difficult to control and trap for the futsal player.

Futsal makes trapping the ball easier than soccer. Because a futsal ball won’t bounce when it’s trapped with your chest, thigh, or foot, it won’t bounce back very quickly.

In contrast, a soccer ball is more bouncy, making it more likely to bounce away when you attempt to stop it.

What is the purpose of making a futsal ball less bouncy?

In the end, it makes sense to make a futsal ball less bouncy. There are many players per team in futsal, which makes the field very crowded. Compared with a standard soccer field, the futsal field is very small, with plenty of tight spaces.

Consequently, there are few open spaces for futsal players on the field. In other words, they are almost always in close proximity to an opponent.

In this situation, a bouncy futsal ball will cause the players to lose the ball significantly more because it will bounce away from them a lot more when trying to trap it. An opponent will almost always steal the ball as soon as it bounces off a bit.

Having a less bouncy futsal ball thus helps the players pass the ball successfully more often to each other during the match. Passing between teammates can make all the difference at critical points in the game.

Any problems with the futsal ball size?

While it is true that making the futsal ball less bouncy will allow players to control it more efficiently, it will also make kicking it more difficult.

When compared to other balls, Futsal balls are harder to kick. However, in futsal, the players do not have to make the ball travel as far as in regular soccer, so this disadvantage doesn’t negatively affect the game.

The dimensions of an official futsal goal are 3 meters wide by 2 meters high.

Almost all parts of the futsal goal can be reached by futsal goalkeepers so fewer shots end up finding the net in futsal. Moreover, since goalkeepers can easily reach every corner of the goal, shots must be placed with a lot of force or disguised with an element of surprise (think ‘toe-poke’ in futsal) to have a chance of bouncing in.

The futsal ball is designed to meet the unique requirements of the game. With more control and speed, a heavier ball makes for a much more competitive and fast-paced experience. Add the smaller goal size to the speedy mix, and you have a very different game than football.