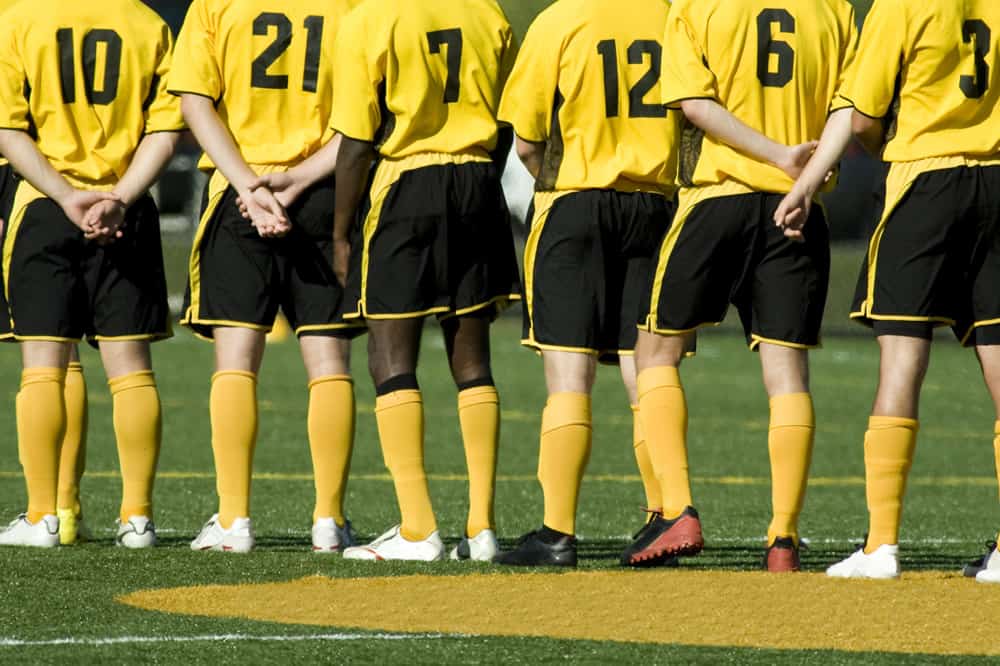 How Many Players are on A Soccer Team?

A professional soccer team in the professional leagues may start a game with a maximum of 11 players on the field. More than 11 players can’t be on a soccer field due to its size.

Soccer coaches in the national leagues carefully select each player to perform a specific role for their team in professional games. Coaches’ positions and formations on a soccer field are determined by the number of players available at that time.

Here’s an overview of how many players are in defense and how many are on offense on the football field.

The number of defensive players on a team

Each soccer team assigns some of its players to defend its goal.

A soccer team consists of six players on defense. In addition to the goalkeeper, an important position in soccer, there are two fullbacks, two center backs, and a defensive midfielder.

For the majority of soccer matches, there are usually six players in defense, but it is up to the coach to decide how many players he wants to use.

On the edge of the field, the fullbacks are positioned outside the center-backs.

A soccer team has a certain number of offensive players.

The number of offensive players on a team

In addition to having defensive players, each attacking team will also have some offending player positions.

An offensive soccer team consists of five players. A midfielder, two wingers, and two forwards make up the offensive players.

According to a coach’s strategy and tactics, the number of offensive players can vary from one game to another.

However, it is often the case that teams have five offensive players on their roster.

Of all the midfielders, the attacking midfielder is generally the furthest forward. It is their job to create chances for the forwards to score.

The two wingers play on the edge of the field or the “wings.” These players cover the flanks of the field during a game and are usually the fastest players on a team.

There are usually three forwards on a soccer team – a striker, a center forward, and a winger. Players such as these are responsible for scoring goals for the team and being the focal point of the attack.

A team including substitutes has how many players?

Even though according to customary soccer laws, a soccer team can only have 11 players on the field at a time, there is usually a number of substitutes waiting alongside the field.

The soccer rules dictate that a soccer team can consist of a maximum of 23 players and a minimum of 14 players, including substitutes. Under soccer rules, a team may name any number of substitutes as long as it does not exceed the maximum number.

According to soccer rules, there is no limitation on how many substitutions a team may make during a game. There is simply a minimum and maximum number for each team. Each team can decide how many substitutes it wishes to have available according to the positions in soccer.

The team must, however, declare all its substitutes before the game. After the game begins, teams cannot add players to the list of possible substitutes.

Ideally, teams should have access to three substitutions during a game, so there should be a minimum of three available.

Temporary rules of soccer permit teams to make five substitutions per match, but most teams are limited to making three substitutions at most for the duration of the game.

Soccer teams are usually sized according to the physical abilities of the young players.

The number of players on a college soccer team

There are many similarities between college soccer and professional soccer. There are no differences in the rules, the length of the game, or the formations of the players.

The number of substitutions permitted is one area that differs.

On a college soccer team, there can be over 30 players, including substitutions. The college-level of soccer allows unlimited substitutions. Teams can therefore field many players on the field and the soccer bench.

For most levels of soccer, having an extensive roster is uncommon. Despite providing more opportunities to play for the team, many players sit on the soccer bench instead of playing during college soccer seasons.